Majickal Bellydance: The Motivation to Dance

- August 11, 2017
Majickal Bellydance: The Motivation to Dance: We are suffering the coldest depths of a Melbourne winter and other than directly to my car, I've barely stepped outside in weeks. My ...
bellydance empowerment healing stress management

The Sun from The Mythic Tarot Have you ever drawn a blank when it comes to reading the Major Arcana of the Tarot? Would you like to connect with their meaning in a way that doesn't rely on your memory? Forget Memory! This article outlines a step by step method to help you gain access to the wisdom of the Tarot, minus busting the mood by shuffling through books. If you're new to using Tarot, the Major Arcana are the cards that are usually marked 0 - 21. (Except the Mythic Tarot, pictured. You can recognise those by their lack of numbering.) The Major Arcana cards begin with The Fool and end with The World. They are distinct from the suit cards that are numbered Ace - Ten in each minor arcana set of Wands, Pentacles, Cups, and Swords. Other variations include Staves, Rods, Knives, Chalices, Coins, etc. depending on which deck you choose. The Major Arcana represent overarching archetypal stories playing out in our lives. In other words, if the minor arcana is the stor
Read more

- November 04, 2017
April 2020 NOTE: I released my first book in October 2017. You can find it here . This post is supposed to be introducing my new book . But things haven't quite gone as planned. In fact the obstacles have been so relentless that I am wondering whether the universe is delaying my launch for a reason. First, as the book was printed and drying, I was copying the blurb into some promotional material AND I FOUND A TYPO. I jumped into the car and headed straight for the printer, which had just closed. I was horrified. It was the first paragraph of the back cover! It's amazing how these things get through when the words are read so many times. Fortunately the printer was able to perform a miracle quickly and efficiently. Relieved, I continued preparing for my launch, scheduled for the 1st November. Next was my website. I had been gradually learning and building a new website with my free 1 page website builder for months. I decided, just to be safe, to upgrade the website prior
Read more

You are Multidimensional - Book Launch and Online Meditation Series 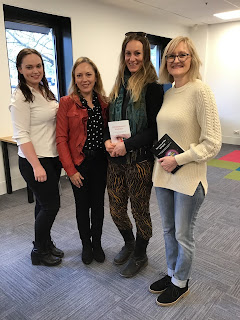 It was an ironic start to the day of the launch of Multidimensional Meditation . Coffee drinkers will relate to that moment when you flip on the kettle for your morning brew - to find no life in the kettle!  Instead I was doing a 'macca's run' - in pyjamas - on the morning of my launch. I had forgotten there would be a power outage that day and I wasn't impressed! My plans of a calm disposition, tidy hair and an ironed shirt weren't to be. I'm the short one! So, crumpled and frizzy, carrying a box of new books, I marched off to my first author talk. The launch was hosted by Lilydale Library, set among native trees between Lilydale Lake and Box Hill Institute, Lilydale Campus. I do love the area and felt honoured to be presenting my work to the world from such a peaceful and grounding place. Library staff made the whole launch really easy for me. All I had to do was show up with my books. The space was already set-up for me. A long table stretched across
Read more