- May 24, 2019
All around the world today people rallied for Planet Earth by attending the Global Strike For Climate.  I attended the Melbourne Climate Emergency Snap Rally, organised by the Extinction Rebellion Victoria (XR), to align with the global event. Melbourne protesters gathered at the steps of Parliament House for the march down Bourke Street. 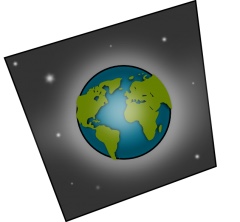 Facing public transport on a rainy, black and grey-sky day posed a flight risk! But I dug out my little-used Myki card and headed for the station. An hour later, as I approached the crowd of early arrivers, the entertainment made it seem as if John Lennon himself had risen from the dead, singing Beatle's classic, With a Little Help From My Friends. I wasn't born yet in the 60's - so I'm no expert - but isn't this protesting business a little retro? Someone summed it up perfectly on their banner: 'We shouldn't have to protest!'

At first the crowd didn't seem to have much energy. They were mostly quiet, except for a group of fired-up young people at the front, probably organisers. One protester (whom I propped myself next to at the back) commented on the disappointing crowd size. It seemed we were protesting the same way we had voted.

But then something happened and the universe shifted everything a notch. A gap opened up in the morning sky. Rays of sunshine reached through and warmed our backs so that we were stripping off coats as we moved into marching-mode. And the protesters were awake!

Suddenly all the late-sleepers seemed to come at once, because the crowd doubled, quickened, and roared. Someone began thumping a drum as we piled into Bourke Street, a worthy mob for Mother Earth. Thousands of voices began singing in rounds of: 'What do we want? Climate action! When do we want it? Now!' Words drummed through the crowd and the mood was brightening.

As we thundered down one of Melbourne's busiest streets - halting trams, mobilising police, excluding cars - my sense of hope began to rise. Busy workers expressed their solidarity by waving at us from high in their concrete boxes; their smiles pushed against the window so that we knew they were with us in spirit. The workers' energy boosted our own and we recognised their presence with us.

Then everything stopped! Protesters understood that we were to drop to the ground 'as if we were dead.' An odd feeling if you're slow - like the ground is falling away - but I folded myself into the last gap on the ground, grateful the rain was draining away along the tram tracks. So there we were - a couple thousand of us I think - dropped across the tracks in the middle of the road.

And then the cluster fell silent. A moment of climate quiet. Sitting or lying down, close-packed, like tribe. The tribe honoured the planet with their silence. Our recent political disappointment appeared to fade as a cheer resonated from the front of the group, rising again and again as it bounced through the crowd like an echo. Energised, we rose to our feet and continued marching with the XR in support of the following demands, as listed in the facebook event information:

Government must tell the truth by declaring a climate and ecological emergency, working with other institutions to communicate the urgency for change.

Government must create and be led by the decisions of a Citizens' Assembly on climate and ecological justice.

But people marching at the rally expressed their own concerns on their banners, mostly made from cardboard they'd appropriately pulled out of the recycling bin. One protester even re-purposed a cardboard panel featuring a ready-made slogan by planet friendly company, Who Gives a Crap. The company name/logo cut from their box, morphed into slogan-speak with the addition of black-texta crafted words: 'We do!' I liked their resourcefulness.

Let me take a moment to note the actual words of some of the people who marched for the planet today. With the superpower that is the written word, they told the world:

The Kids Are Not Alright

No Economy on a Dead Planet

Our Conscience Won't Be Bought

There's No Planet B

It's Time to Panic

I Speak For the Trees

Won't Somebody Please Think of the Children

We Shouldn't Have to Protest

The protesting isn't over. Multiple events have been planned for coming months. Check out the facebook event page for more info on how you can help.

I must admit that after last weekends election I felt discouraged. That and the rain almost shut me in my apartment for the day. But I'm glad I went. Participating in what is practically a group ceremony helped to raise my hopes a little. Walking among young and passionate activists helped me see that the team are on it! The people are moving to do what needs to be done. Speaking the words that need to be spoken. Facing the truth that needs to be faced. Expressing their love for our cosmic miracle of a planet.

At the end of the day I find myself asking, do I believe things will change? When I ask myself the question, the answer seems obvious. Yes! Of course the world will change - because the world is changing. We'll have to. No matter who is governing, there is no status-quo on a living planet.

Blessed be our Mother Earth X

P.S. I haven't joined yet. I'm just a writer, writing her content writing assignment - but I might.