- December 10, 2019
November was the month for an event known among writers as NaNoWriMo, which means National Novel Writing Month. Participants sign up and make a pledge to complete writing 50,000 words in 30 days. Although it's named 'National,' it has become an international competition.

Since first noticing the event on Social Media, I had watched it go by me for several rounds. But this year the planets aligned and something different happened. After writing the first 40,000 words of a new manuscript I came to a slow spot. It wasn't writers' block because the rest of the material for the book was sitting right at the edges of my brain just waiting to be written down. I had just lost motivation. So I definitely hadn't consciously planned on participating in NaNoWriMo. I didn't even know how.

The repetition of a ritual for a set period of time is something I usually do when I'm making majick. Repetition of an activity reinforces neural pathways that once strengthened, become easier to activate. To put it simply, it's brain training. Well, I'm in training to become a disciplined and productive writer. Not that I hadn't produced anything yet (see my books HERE), but to bring the writing of my third book to its completion I needed a little majick!

So, on the 1st November I woke bright and energised with one thing on my mind - NaNoWriMo. I bounced out of bed and - after a quick Google search to learn about what to do - I signed up straight away. I didn't watch any of the motivational videos, although I'm sure they're great, I just got to it and began writing that morning. If I could write 50,000 words in the month of November, in addition to what I already had, I would end up with a 90,000 word manuscript.

The first week was easy. I thought, 'Yeah I got this!' I felt I could write for an hour a day for the rest of my life. I thought I could be as prolific as Stephen King! I'm prone to being overly optimistic. But by the end of the second week I was struggling to motivate myself. My preferred habit of writing during the late afternoon meant that I could easily be distracted by things like napping, cooking and re-runs of Star Trek on TV. I needed to maintain a 1,666 daily word requirement to reach 50,000 words by the 30th November and it was getting tougher.

Oh did I also mention that I started a new job that month? Yes - apparently I like a little pressure! So being back at work after a long absence took a lot of my energy and I had some doubts about whether I could combine the challenges of a new job with the challenges of NaNoWriMo. I'm also managing a tendency towards anxiety, so my nervous system had begun to vibrate a little. But amazingly I was able to keep struggling on - until I got a massage.

The hours spent hunched at my tiny MacBook Air had taken their toll. So I reasoned that after spending $80 on getting my shoulders loosened, I could take a break. Then I reasoned that it wouldn't matter if I didn't reach 50,000 words because I had heaps of words anyway to get a draft of my third book together. It was a slippery slope and I was on the slide!

And that's where it got super hard. Was I going to step back into this game? Or would I just bow out and be happy that I had a 70,000 word manuscript written. I had started with 40,000 so this was worth acknowledging as an achievement and maybe even an end point where I could now just get on with forming the material into a solid first draft. Would I or wouldn't I complete the 50,000 words and win NaNoWriMo? I could clearly see two potential outcomes unfolding before me. The idea of not finishing NaNoWriMo had become very real - but I didn't like it - and I was 6,000 words behind!

Then, at the perfect time as if by majick, I received an email from the organisers of NaNoWriMo listing the prize package on offer. As soon as I saw the words 'Winners Badge' I decided I wanted that badge for my blog! So I got back to it. It took me five days to catch up but I think the massage helped me to physically endure a little more. It's amazing how physically draining writing can be. 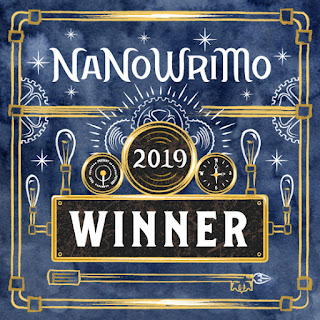 On the 28th November I completed writing the 50,000 words required to win NaNoWriMo. I was too exhausted to be ecstatic, but I was pleased and a little surprised. The journey often looks easier following its completion, but I did feel like I could continue a more moderate form of my new daily writing ritual on an ongoing basis. My perception of what I'm capable of has shifted and since then it has in fact been easier to sit at my desk and write, even on the days when I'm not feeling so 'creative.'

This wasn't just a writing competition, it was a spell. A major ritual held across thirty days, to invite in the energy of daily writing. According to neuroscience it takes around thirty days of repetition to solidify a new neural pathway, it's literally brain training. Well it worked. Now it feels weird if I miss a day of writing.

Will I do NaNoWriMo again? Maybe not, it was a little too stressful for me. I'm already a bit uptight, which is why I learned about meditation in the first place. But if I find myself with another manuscript idea, mature and bursting with juicy ripeness on the 1st November, I may get swept along with the opportunity at a future time.

Now I'm off to go through the many emails I received during the month of November, including the motivational emails from NaNoWriMo. I didn't look at them during the competition because I was just too busy writing - that's what it was for - my emails stacked up to epic proportions that I'm now afraid of!

For now, my new manuscript is physically resting. But mentally, its new totality is rippling around my mind like sand dunes, shifting and experimenting with position and structure. In around a month's time I'll perform a structural edit and work out what needs to be added or taken away.

Until then, I have various other writing tasks to go on with including winding up the final touches of a Content Writing Course with The Australian Writers' Centre. I didn't think I would need the full year to complete the online course, but December is the last month that I can access it, so I'm suddenly in a hurry - so typical of me! Also, I have a NaNoWriMo winners' badge to download and display somewhere proudly, including this blog post.

The working year is ending for many of us and it's time to wind up big projects and prepare for the Solstice, where we celebrate the changing of the light. Here in my hemisphere, the light is about to peak, which revivifies me. It has been a bone freezingly cold winter down here in Victoria. So I'm grateful for the sun warming my apartment, my blood, and my motivation. There's much to do now, and a new baby manuscript to nurture. Subscribers can catch my Solstice Newsletter soon.

P.S. I pasted the new badge in the drop down menu at the top left of the screen.

P.S.S. The headline for this blog post is the final assignment for that Content Writing Course I mentioned. I like to multitask!
Books Creative Evolution events spellcrafting Writing