When the Body Stops the Writing

So far this month, I've been wallowing in my new nest. My mind has been consumed with hanging pictures and sticky hooks, assembling flatpack chairs, and cleaning the old dirt caked on by the previous owner of my new home.  Any physical efforts have been hampered by a knee twanging case of tendonitis. I want to be charging through edits on my memoir, but it seems most of my energy is being burned up by the physical dimensions of my life: body, space, nest, nutrition, rest.

Like the house of Dorothy, mine has spun through the air, flattening the wicked witch I had become at my previous home, leaving me feeling like Glinda the good witch is still alive and shining within me. It's hard to have a happy mind in an unhappy home. I've been in my new home for nine weeks, and I catch myself having a little giggle from time to time about my luck.

My psych would say it wasn't luck but good choices. To help me manifest the right home I also maintained a five-year ritual of spell-crafting. Then at the right time, I got a message from the universe. I had to phone bee-keepers to remove two swarms of bees hiving in the compost bin outside my bedroom window. The divinatory symbol being manifested in the form of two queens being re-housed. A couple of months later a woman my age bought my old apartment, and within a month I'd found my new home.

So as my sense of home gradually slows its spin, I realise that in shifting my physical perspective, all dimensions of my life are effected. Our home is our base, resonating with our base chakra. What affects it, affects everything.

That means my creative task at the moment is simply to allow the physical dimensions of my life to settle and recover from the move. My vision of 'hitting the ground writing' has proved to be overly ambitious. What I really need is down-time.

When the tendonitis reached its peak, a healer friend suggested stopping everything and just lying on the floor with a heat pack. My regime of yoga, dance and physio exercises needed to stop for a while. My tendons were too aggravated to use. I wanted to be at my desk writing. I wanted to be out walking all over my new suburb, climbing five flights of my new building's stairs to up the ante. I wanted to be dancing every afternoon, finishing the choreography I've been working on for months.

Reluctantly, I realised I needed to take the advice from my own books, allowing dimension zero and one consciousness to engulf me in its nest. So after I figured out which way the lounge room rug was going to go, I laid my fidgeting self upon it, on a yoga mat with a blanket and a heat-pack. My mind still buzzed with things I wanted to do, so I added some meditation sessions to help me focus the energy of my mind and release into full body awareness. After a couple of days I was able to add some extremely light stretching, softly shifting the position of my arms and legs. Now I'm doing my physio again, and a little gentle yoga.

But my shoulder is stiffening from this blog post, so I'll leave it there for this week.

At Dimension Zero I am held in space.

At Dimension One I move in space.

What is Multidimensional Consciousness? 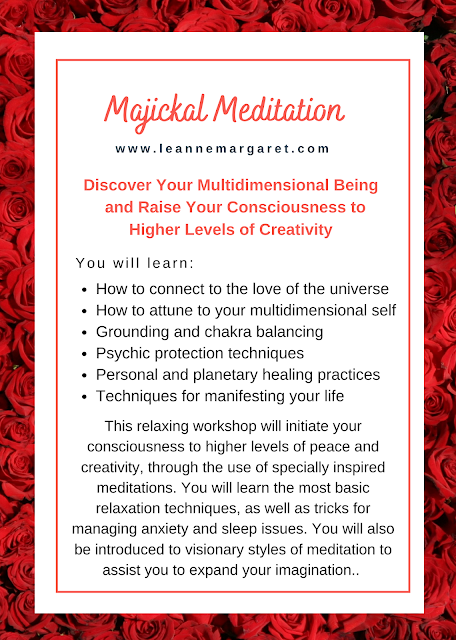 Majickal Meditation Workshop Chirnside Community Centre 1pm, Monday 26th April, 2021 2-hour workshop, $45. Bookings: 1300 835 235 Online Bookings HERE   Join Facebook Event Here 'Did you know that anyone can meditate? Even if you have a thirty-second attention span. Even if your eyes roll at the thought of sitting for an hour in lotus pose, chanting mysterious words. Even if meditation makes you just want to go to sleep. In fact, you're probably doing it more often than you realise.' -from book, Multidimensional Meditation, by Leanne Margaret Let me show you... Are you too busy to stop and connect to your real needs? Join me, as I guide you through a series of meditations to help bring you home to yourself. You will begin with simple awareness of your body. Then, you will gradually ascend to higher, freer levels of consciousness; step-by-step. These higher levels can assist you with your creative work, as well as helping you to transition into sleep.  Most of all, you wil
Read more